Home/Volunteer Recruitment/Recruitment for Volunteers: Key Trends & What to Do About Them

Has your nonprofit’s recruitment for volunteers been less than effective lately?

Are you disappointed with lackluster response rates to your calls to action? Are you worried that people simply aren’t volunteering anymore?

Have you given up on your dream of full volunteer capacity?

Before we come to any conclusions and throw in the towel, let’s look at the data.

From the looks of things, interest in volunteering is alive and well. In fact, while statistics for volunteerism in 2020 are few and far between, there are trends we can report. And, in some countries, we appear to be experiencing a resurgence in interest.

A few years ago, the volunteering rate reached a record high in the United States, topping off at 30.3% of all adults in the United States contributing their time each year. This is the highest rate we’ve experienced in the past fifteen years or more. 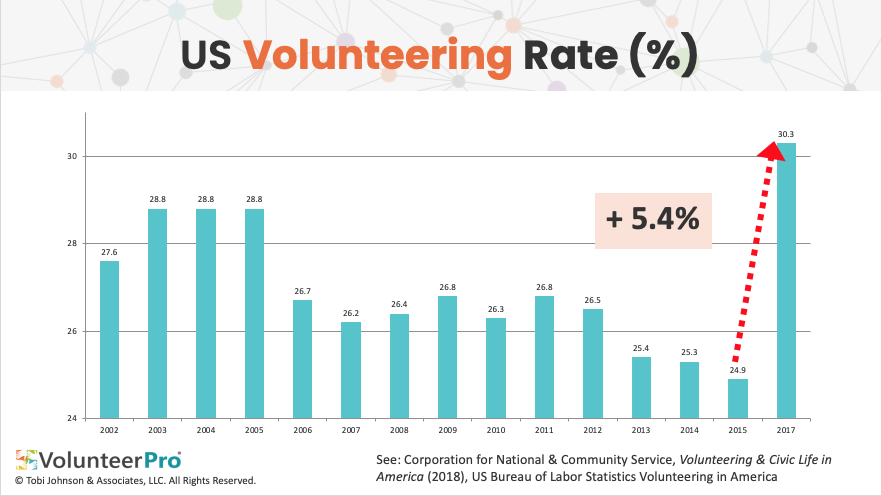 Rates are similar in other countries, as well.

In Australia, 31% of the Australian population aged 15 and over participated in voluntary work in 2014. Rates have fluctuated between 36% and 31% over the past decade.

More recent research in the United Kingdom reports that 38% of Britons volunteered in the past twelve months.

In addition, according to data reported by the Urban Institute, the average number of volunteer hours has increased by seven hours per year between 2008 and 2017, when volunteers contributed an average of 137 hours per year. 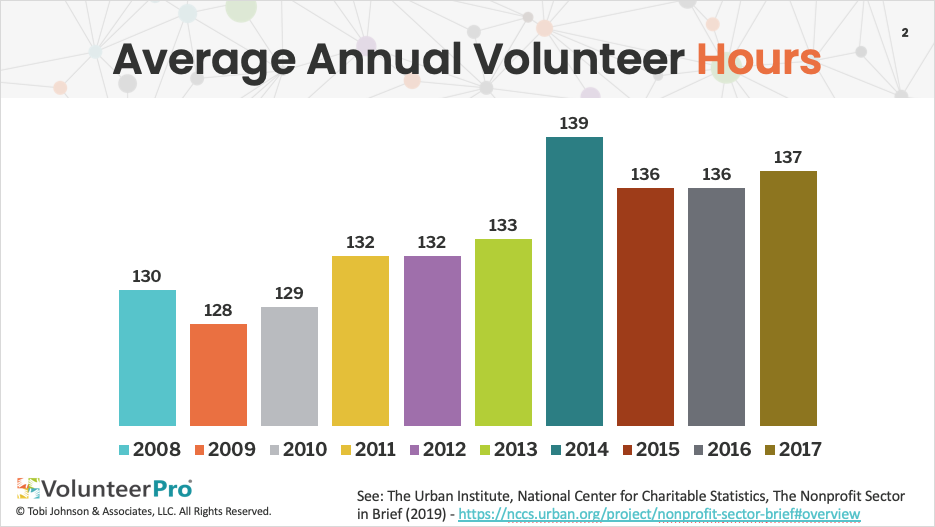 In Australia, citizens contribute an average of 128 hours per volunteer in 2014, over twelve months.

In 2019, a comprehensive survey on volunteering in the United Kingdom reported that 22% of recent volunteers could not remember how many hours they had given in the past four weeks. Of those that did recall, they reported an average of 8 hours in the past month (or an equivalent of 96 hours per year).

In the United States, the percentage of volunteers that remain volunteering a year later dropped to 62% between 2010 and 2018. So, it appears that, while many people are joining the ranks of volunteers, retention rates may reflect a greater churn in participation.

From these data, it’s not clear if volunteers are returning the next year to serve again, only whether they are still volunteering one year later. 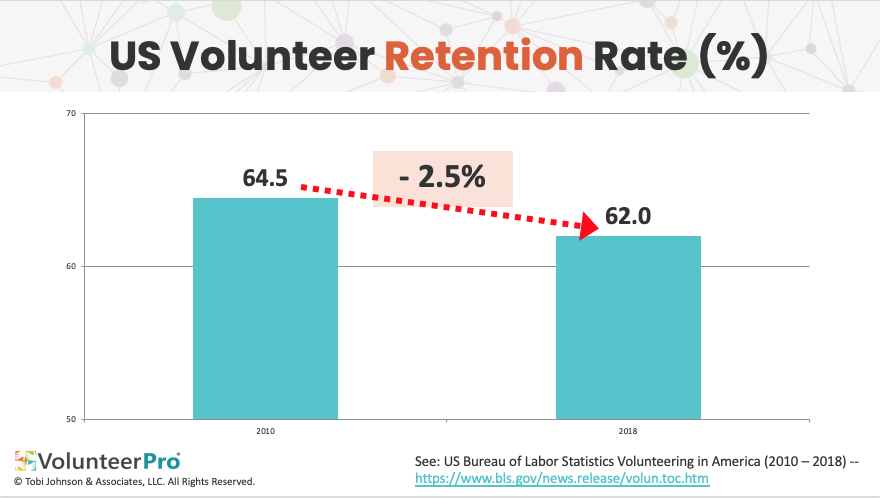 In the United Kingdom, 80% of volunteers reported they were fairly likely or very likely to continue volunteering in the next year.  We were unable to find volunteer retention rates for Canada and Australia.

In addition, there may be more options for places to volunteer. Approximately 1.56 million nonprofits were registered with the Internal Revenue Service (IRS) in 2015, an increase of 10.4 percent from 2005. 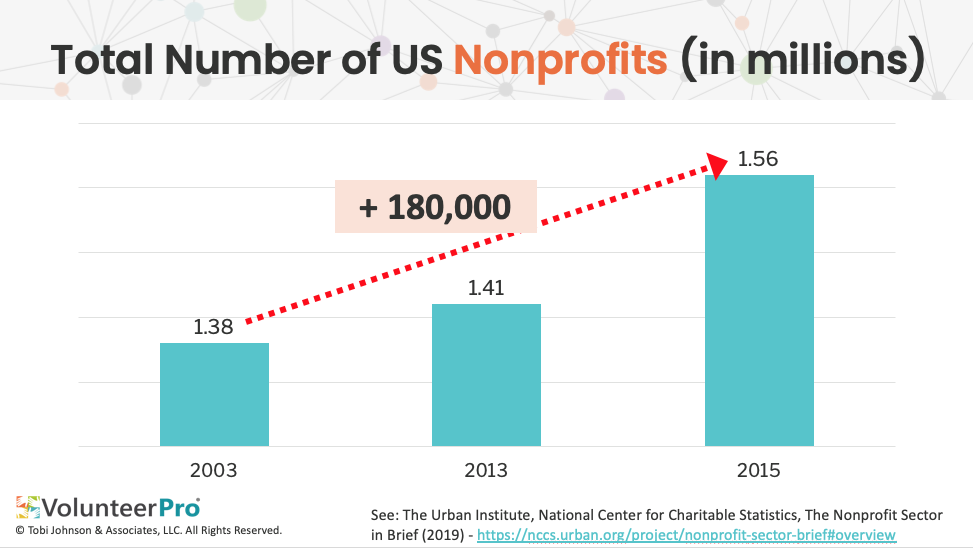 So, while there are plenty of people in your community right now who might want to help, the marketplace of opportunity may have become more competitive.

Recruitment for Volunteers in a Changing Society

If there is greater competition for time and talent, then nonprofits must get better at outreach and marketing in order to stand out above the crowd.

So, how can volunteer organizations amplify their message and reach more people? And, what channels are volunteers using most often to find opportunities?

Recent research from VolunteerMatch and Sterling Volunteers report a disconnect between the methods organizations are currently using to find prospective volunteers and the tools volunteers are using to connect with opportunities to serve.

They found that while 47% of the over 10,000 volunteers surveyed find volunteer opportunities online, only 15% of volunteer organizations use online tactics.

Instead, they elect to use other methods such as program announcements, word of mouth marketing, clubs and other group-based networking, recruitment events, and referrals.

While some of these may still work, it’s not currently where many volunteers can be found.

Data from the VolunteerPro 2020 Volunteer Management Progress Report also shows a positive correlation between the number of volunteer opportunities filled and the use of digital tools, like Facebook, to engage volunteers.

The chart below shows this in clear detail. The organizations that post to Facebook are more likely to have a greater number of roles filled over the past year.  And those who post volunteer-related content on Facebook daily (30%) were more likely to fill 91-100% of their open volunteer opportunities. 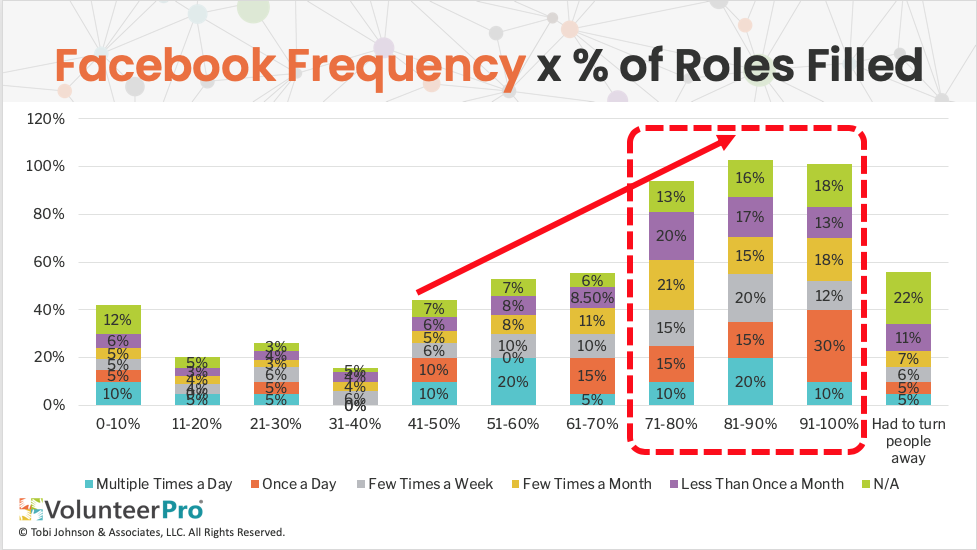 For many reasons this makes sense. According to the Pew Research Center, which has been tracking digital participation for over a decade, about seven in ten (69%) of U.S. adults use Facebook.  In addition, among those who use Facebook, around three-quarters (74%) visit the site at least once a day.

And, while Facebook may have been a tool for the young in the past, these demographics are changing. Around eight-in-ten (79%) of those ages 18 to 29 use Facebook. 46% of those 65 and older use the platform, a percentage that has more than doubled since 2012.

It’s clear that both the context of volunteering and the preferences of volunteers are changing. To review, here is what we know:

Given these realities, it may be time for nonprofits to reconsider their “old school” recruitment for volunteers and retool for today’s modern world.

What worked in the past is not likely to work today as communities, more and more, turn toward their digital devices for information. Today’s consumer expects timely, relevant information that is tailored to their needs, and they want it delivered directly to their phone in easy-to-digest increments.

No longer do volunteers feel bound to be loyal to a specific organization over the long term. Rather, greater commitment is tied to a cause that offers community and connection. 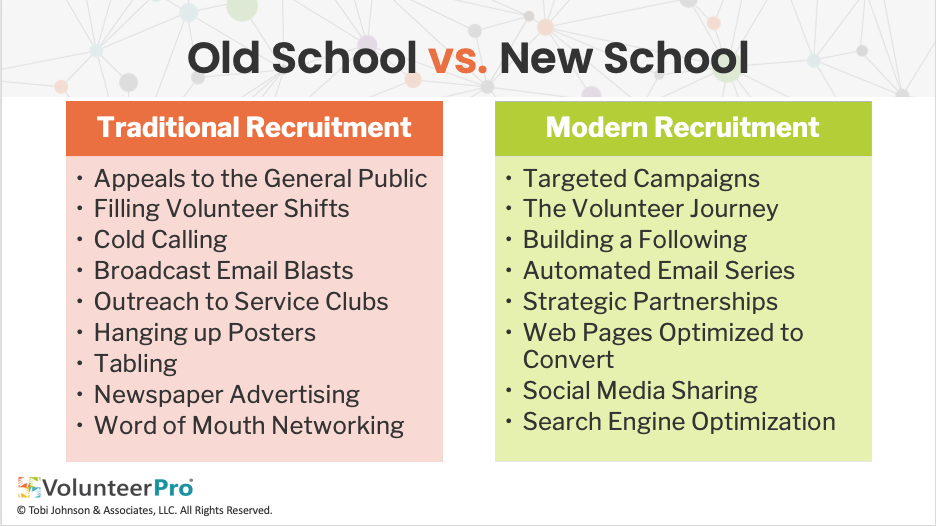 In order to succeed, organizations will need to recruit volunteers with digital tools and a strategy that builds upon their sense of identity, rather than relying on yesterday’s “spray and pray” tactics.

That means taking time to identify a target and delivering consistent, relevant communications that build bonds.

As more and more organizations seek to meet their missions with volunteer talent, only those that recruit for volunteers by building and educating an online following will be able to break through and be heard above the static.